Get fresh music recommendations delivered to your inbox every Friday.
We've updated our Terms of Use. You can review the changes here.

Too Dead To Notice 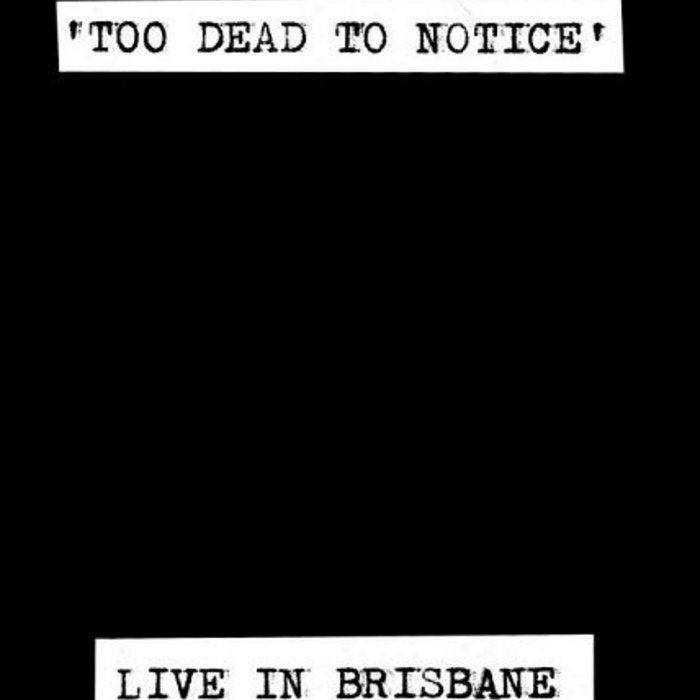 The original live cassette released by Negative Guest List records in early 2011. Recently reissued on 12" vinyl as 'Live In Brisbane'. For a digital download of this release visit the 'Live In Brisbane' page.

"For those of you who've been too busy taking the Gin Club seriously to notice, the last few years have seen Kitchen's Floor cultivate a unique sound born in the lower-right bedrooms of Brisbane's inner city sharehousing. This gas was captured in all its lo-fi glory on 7” ('Orbit/Regrets') and full length recordings ('Loneliness Is A Dirty Mattress') by the RIP Society Label, the latter of which was just pressed to vinyl in partnership with Bedroom Suck Records. These recordings were well received the world over and made listener's grow body hair. Here, the distribution hustle is passed to the hands of men, and I am proud to present the group's latest opus, and their definitive release thus far.

'Too Dead To Notice' sees Matt “newt in the saucepan” Kennedy explore areas of shimmer not heard of since 1980's Dunedin. KF's initial duo of MK on gtr/vox and Julia Norris on drums is fleshed out w/ melodic stupor by Andrew McMellan of Cured Pink Radio on organ. The result is a malaise of pickled heartache and non stop downer hits, full of class and character. This cassette release (10” vinyl issue pending) was recorded live in Woolloongabba in an early winter of unseasonable warmth. Coasters, check mate! You hear the sweat but you don't wipe. You absorb. Suck it up! Here, hear the very best of one of Brisbane's few good bands in a post Razar/Leftovers gooniverse."

Bandcamp Daily  your guide to the world of Bandcamp

Guests John Beltran and Kim Myhr walk us through their magical musical adventures.